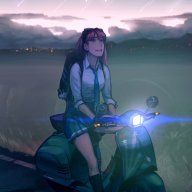 I guess from the beginning we all had no clue what the world was going to be like ,the only idea about what it might be was from television from depictions of pure joy to the hard rough street life of a thug but they never put what life is like in the "middle" ...The slow drag ,the stagnant pond ,it's roller-coaster from totally elated to utterly defeated...social expectations, disappointments, obligations, etc..

but in that seemingly stagnant pond there's a ripple something so beautiful that it defies the ability to articulate it's wonders only where it is ,from a dance with friends, from that look a couple who's been in love for decades give each other ,how the light and shade intertwine underneath a tree in summer ,the smell of the wind during a festival or event, the anxiety from entering something new, entering a new relationship...

If we look at it from an alien perspective, everything's so amazing. We're on this planet in the middle of a solar system just flying through space feeling all these emotions...experiencing all these wonders, but...it's not good enough for most...we can achieve so many great things but we don't want to..we're so engrossed with the idea that life here is the end all be all and maybe it is .....but it's too big to end on this one Blue Planet...there's something out there, not heaven , not nirvana ,something beyond it all.

Something that reminds us that underneath it all we're all more than anyone will ever know.