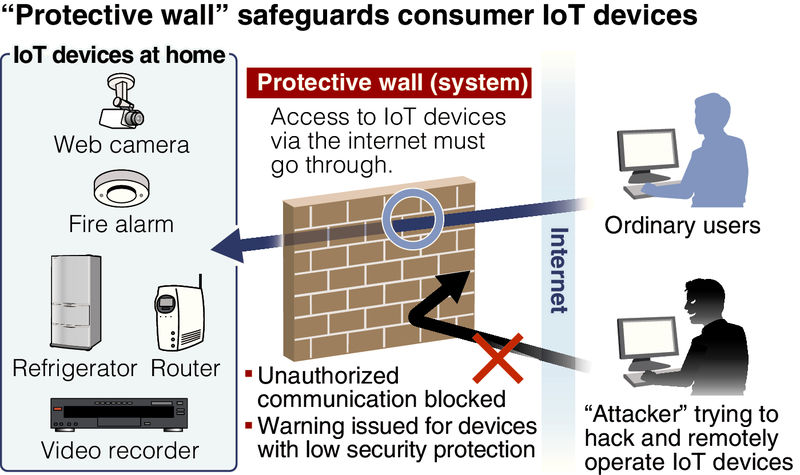 In preparation for the spread of the internet of things (IoT; see below), the Internal Affairs and Communications Ministry will develop a “protective wall” to safeguard home electronics connected to the internet from cyber-attacks, The Yomiuri Shimbun has learned.

There has been an increasing number of cases in which IoT devices at home are hacked and used as a base for cyber-attacks. The ministry plans to build a system, or protective wall, on the internet to prevent unauthorized operation of devices and stop them being infected with viruses, according to sources.

Development expenses totaling several hundred million yen will be incorporated in the second supplementary budget for fiscal 2016. In cooperation with electronics makers and telecommunications carriers, the ministry aims to put the system into practical use within a year or two.

It is difficult to improve the security of home electronics such as televisions, security cameras and routers by upgrading their software. While industrial IoT devices and personal computers are guarded with a protective wall or software, many consumer IoT devices are vulnerable to cyber-attacks.

Research firm IHS Technology estimated that there will be about 53 billion IoT devices around the world in 2020, more than triple the figure in 2013. The number of cyber-attack cases has been increasing in line with the wider use of IoT devices. Among the confirmed cyber-attacks in Japan in 2015, 26 percent targeted IoT devices.

There will likely be various problems if IoT devices at home are hacked and remotely operated. For example, unauthorized users could peep inside a targeted home through a security camera. They can also tamper with temperature settings of refrigerators to cause foods to perish.

They can also attack a website by using home electronics they have hacked as a base and make the owner of them appear as the “attacker.”

According to a survey conducted by Yokohama National University in 2015, there are more than 300 kinds of IoT devices that have been hacked and used as a base to launch cyber-attacks. Those devices include digital video recorders and TV set top boxes.

The IoT is a system in which all kinds of devices, including home electronics, automobiles and robots, can be connected to the internet. It is expected to be utilized in a variety of fields. For example, automobiles will communicate with each other to prevent collisions.