Strangest thing you jerked off to?

Chimin' in with my own little 2 cents' worth...

I couldn't pin point the strangest thing I've jerked off to, but there has been quite a few odd moments...

- Jerked off to "puppets": usually the very female-sexualized puppets
- Jerked off to a Yoga practice once (on an app) not because of the yoga positions but because the lady was simply a stunner (in my books)
- Found myself once jerking off to the sound of a girl gagging and puking. I think maybe I wasn't 100% sober that time...!
- Obviously jerked off to bi-sex, homo, T/S-shemale stuff way more than anyone would care to admit!

Toggle signature
"... anything else is just brand X"
"Do what makes you feel good"
butterbbbinc.blogspot.ca 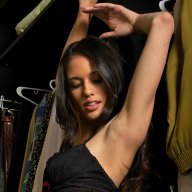 There was this co-worker of mine about 18 years ago and we were on a business trip together in Taiwan, she was one of those good looking girls in the department and I was a little more senior than her and she had always worn sleeveless (i'm a fetish of armpits and that is always a huge turnon) to work and only sometimes fully covered, that day we boarded the same plane in the morning and arrived in Taiwan mid-afternoon and she was wearing a sleeveless top with a coat over and when we checked into the hotel we decided to finish up a presentation as we had to meet up a client later that night, all this while she was wearing her coat and we did a fair bit of work in my room and she took it off to get more comfortable, as it was already towards the end of the afternoon, I could start to smell her pheromones, she smelled amazing with a tinge of musk from her armpits, it was turning me on and I wished I could have sex with her but that's not the case. We worked for a while and she decided to go back to her room to freshen up for dinner and to meet up with the client and she left her coat in my room as she left forgotten about it, I only notice when she left and I too wanted to shower and freshen up. I took her coat and wanted to send it back to her but I just couldn't help it but take the smell of her coat on the armpit area as she had smooth armpits and she was good looking. My god her smell was really a turn on and I could smell her pheromones and the great musky smell from the whole day from the airport, in the plane and all the car rides, her deodorant was almost gone and left with nothing about her smell, I was already having erection ever since she was in my room when she took off her coat and I could occasionally see her armpits and she was tying her hair and sometimes adjusting her hair and raising her arms.

Yeah, till today I still think it was strange to jerk off to her coat with her armpit smell, but no regrets, it was the best thing that happened and not a day goes by I thought about it, and sadly such opportunities didn't come anymore. If she was my GF or wife I would have told her that her armpit smell made me fell to my knees.
You must log in or register to reply here.
Share:
Reddit Pinterest Tumblr WhatsApp Email Share Link
Top Bottom