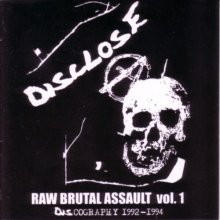 Disclose uses the infamous D-beat drumming style and are sonically and lyrically considerably one of the closest and most extreme adherents of the style. Their sound is very similar to that of Discharge, with an increased use of fuzz and distortion guitar effects. The subject matter is also similar to Discharge - the songs are primarily about nuclear war, and its horrific consequences.

Tragically, on June 5, 2007, Kawakami died in his apartment from an overdose of alcohol and sleep pills, thus sadly spelling the end of Disclose.

DISCLOSE INTERVIEW from Mangelslakt Zine
Well this interview is generally up to date but Disclose has released a couple of things since the time I interviewed Kawakami. The "Aspects of War" 10" and Cassette are now out which consists of some older demo material which is fucking brutal-- check out the review for info on the cassette, but the vinyl for you narrow minded fukkers is available from F.F.T. Records Asahi Plaza Umeda 1212, 4-11 Tsuruno-Cho, Kita-Hu, 530 Osaka, Japan. Also available is the "No More Pain" Disclose comp LP on Your Own Jailer records Marmorv 14B, 752 44 Uppsala, Sweden. Also available is the early 7" some of us still remember on Overthrow (address is above). Disclose have also been on numerous compilations such as the mammoth Iron-Columns 2XLP on Mind Control. That should be easy to find on mailorder at Vacuum or whatever. I go pretty far back with liking Disclose. I got into them like 4 years ago or maybe 5 when they put out a demo on JapanKore records (the drummer from Drop Dead's label/ zine) which some people may remember. They impressed me back then with their intensity, total fucking wall of noise guitars, and wounded- animal vocals. One of the thing I like best about Disclose is that they are totally unpretentious unlike the vast majority of hardcore bands-- they just do what they do, and do it well. They stand tall above the hordes of Disbands.

MS: Why do you sing in English? Why not Japanese?
K: I think English is better than Japanese. Because foreign country people can read and understand English but not Japanese. Also UK style HC is better than Japanese, ha!MS: How has the line-up changed?K: In '90 the line up was 4 members. And a vocalist and bassist left in 92. The new bassist Fukugawa joined. I sung and played guitar. And in '93 the drummer left. Then our backup drummer filled in. He was temporary. Then we found a new one for 6 months, and now we have no drummer! So we couldn't play gigs or record!

MS: You guys sing a lot about nuclear war. Do you think the Japanese view of nuclear war is different because of the atrocities at Hiroshima and Nagasaki?
K: Yes I sing a lot about war. We should never forget Hiroshima and Nagasaki. But fuckin' Japanese soliders killed many innocent country people. Do you know? There were country r***ing, disembowelment, killed, burned alive, Japan committed a lot of crime too. I can't write about war on this paper. If you are interested in our lyrics, please look at our record's lyrics. Never forget Japanese soliders killed too! (Here Kawakami is referring to the war crimes commuted by the Imperial Japanese army in WWII. The army pillaged through Asia targeting China and the pacific islands, killing millions of innocent civilians in an extremely brutal and genocidal fashion. These war crimes are not well known in the West and kept very quiet in Japan. The Japanese government gets away with publicly denying these past wrong doings, and our (US) government enables them by keeping silent. Read "The r*** of Nanking" by Iris Change which is an introductory text to the atrocities committed by the Japanese military. But remember, this is the fault of the Japanese government not the people-- Emily)

MS: Well thats it Kawakami! Thanks for supporting the zine and all. Any final info or comments?
K: Thanks for the interview, I'm glad you got in touch with us. We are releasing some records, if you are interested, we can trade all of them. But not bad records. I lover Pogo Punk, Crust style. No grind/death/melodic, they're boring, thank you very much!
Disclose/ Kawakami/ 408 Northriver I/ 4-5-4 Shininome-cho/ Kochi city/ 780 Japan.

NOTE: Most Disclose stuff at this point is out of print except for the BRILLIANT new 12" called Nightmare of Reality on MCR, available by Sound Pollution in the US of A. Other than that, we think the Tragedy repress has probably been most spread around lately, as well as the No More Pain LP which takes a little more searching. One of the best punk bands around, dammit.
Click to expand...