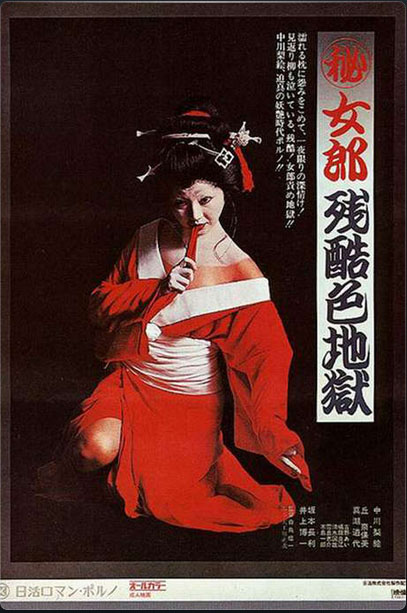 Machine translation:
"I heard that Ometsuke, Izumo Hotta, said that Fujino, an elderly maid of Ooku, went out to the town to pray for the gods and Buddha, and came back with an actor after watching the play. However, things were dealt with comfortably, and when Fujino's room went out to the town, he was guilty of Fujino and sold it to Yoshiwara as a girl. Fuji, who was bought by "Tama-no-ya" with him, was caught in a private cave to earn money for the sick husband's medicine. Immediately, the two were struck by the heart of the girl. However, Oko stole the guard's eyes and ran away. However, Oko was arrested and lynched because he was deceived by the words that Ofuji would let Denpachi meet his host. And for the first time, I was informed that I was a substitute for Fujino. Since then, Oko has begun to take customers as if people had changed. While saying, "It's the body that the general holds!" ... Eventually, the rumors of Oko came to Hotta's ears, and a secret attempt was made to kill him. At that time, Oko was attracted to a ronin named Yajuro Ishimaru. One day, Yajuro gave a testimony saying that he should run away. However, Oko gave the testimony to Fuji who wanted to meet the host. Fuji ran away, but it was a trap for killing him."

Last edited: Saturday at 5:50 AM
Toggle signature
If anyone want support me, please Buy or Rebill Your Filejoker premium accounts from my links.
Thanks a lot!​
K